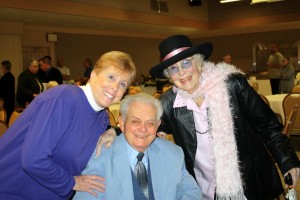 I met a lovely man while working on my most recent column at the Orange County Register. His name is Dee J. Valentine and at 100 years old he had a lively living funeral. I had a front seat to his receiving line of 200 people.

Before I take you there, I just wanted to say it was amazing to see him greet so many people in the receiving line that went on for nearly three hours, without a break. His living funeral was truly remarkable. I sat beside for the party and witnessed him speaking  four languages, of course English, but also French, Spanish and German with his guests. When I told him I spoke French, we chatted in French. I became timid explaining that it had been a decade since I lived in France. He quipped that he hadn’t lived there since he was in his twenties. We laughed. He’s extremely sharp and lives the life that most us wish for at age 100. Here’s the OC Register Column…

MISSION VIEJO – Dee J. Valentine entered hospice and could’ve waited for his heart to slow to the last beat, but instead he invited 200 of his family and friends from across the county to celebrate his 100 years of life.

Some believe that hospice is about dying because you must have a prognosis of six months or less to live, but as Valentine shows, it’s about care focused on your dignity, comfort and independence in your home instead of an institution.

Four weeks into hospice, Valentine shone like a dignitary amid the arriving guests at the clubhouse of the Casta del Sol retirement community in Mission Viejo.

The opening festivities evoked a memorial service: A military color guard performed a flag-folding ceremony against a backdrop of poster-size sepia photos of Valentine: As a baby, child, high school graduate and Army lieutenant.

Valentine relished the pomp and pageantry as the color guard presented the flag that had flown over the Capitol to commemorate his birthday and his military service. He served in World War II and the Korean War, mainly in intelligence services because he speaks four languages — French, German, Spanish and English.

For hours, he greeted his guests, who stood in line, perusing family and military photo albums, signing the guest book and picking up the party favors — crossword puzzles. Valentine attributes his sharp mind at 100 to the puzzle pastime that he took up while living in France during WWII. When he returned from war, he devoted 25 years to Los Angeles schools as a safety specialist and a teacher of driver’s education and French.

Valentine recognized nearly every face in line and spoke charmingly in French to some of his guests. His humor turned many of the poignant tears into laugher. Person after person hugged him, thanking him for being a pillar of support for their families. As an elder of his church, he visited many families to ensure they were keeping their homes peaceful and centered on God. Church bishop Gary Blum thanked him for being a “home teacher” to his son. Blum said his now 21-year-old son has followed the same spiritual path, learning by example from Valentine’s teachings and becoming a “home teacher” too.

On a grand piano beside Valentine, a pianist played the standards from each period of his life. His daughter, Michele Miller, 62, looked on at what she called a “living funeral” because the party allowed everyone to pay tribute to her father.

“I feel a lot of love in this room,” she said. “As our patriarch, he is bringing all the family together before he leaves.”

She said the family was reuniting for the first time in years. She was pleased that they didn’t wait until the funeral to honor him.

He loved two wives over his century-long life. He had two children with his first wife Alice who he buried on their 45th wedding anniversary. Miller’s older brother is now deceased. Valentine later married Roma with whom he inherited five children and many grandchildren. He lost Roma in 2003, but her children and grandchildren flew in from Utah, Washington, Arizona and Sacramento to celebrate with him.

Miller said so many people came because Valentine remains engaged. He is fiercely independent and still lives in the home that he bought more than 30 years ago. She moved in with him recently so that he could stay at home and stay active.

He went on hospice so he could receive supportive care at home, including a home health aide who comes four days a week to help him groom, bathe and exercise so that his daughter doesn’t have to perform such tasks. A nurse comes a few times a week to handle wound care on his legs. Hospice enables him to stay in his home and community.

Many of those community members arrived on canes and in wheelchairs to congratulate him. When folks extended birthday wishes, he responded with one-liners, such as “My second hundred starts today. My real birthday was yesterday.”

He believes in second chances because just weeks before the party, his heart stopped. His home health aide Maribel Cruz from Hospice Care of the West happened to be there and hit his wristband that calls for emergency services. When he woke up in hospital, the doctor offered to implant a pacemaker to kick his heartbeat up from 30 beats a minute. It’s now at 70 with the pacemaker.

“I wanted to stick around for the party,” he said. “Not sure if I would have made it to a 100 or the party without it because I was feeling pretty rocky.”

When the receiving line at the party waned, I sat down to talk to Valentine.

He said, “I’m surprised that so many people would take time out of their busy lives to spend time with me.”

A group of glamorous lady friends joined us. These women in their 80s and 90s from the neighborhood talked about “party hopping.” Another celebration of life was being held nearby, but since Valentine was such a wonderful man, they chose to spend most of the day with him. They told me that more of these celebrations are occurring in their community.

Mickey Shultz, 96, dressed in a stylish black hat trimmed with pink ribbon to match a dazzling scarf, sat next to him and puckered up for a big kiss. Her sparkling blue eyes brought a smile to his face. They’d been friends for more than two decades. She wants to make it to 100 like Valentine. After they kissed, she swooped in for a hug. She summed up the sentiment of the day.

“Everyone loves Dee J.,” she said.

About a week later, I visited Valentine, and he was still beaming about the celebration.

“I was happy to renew with old acquaintances,” he said. “I didn’t know I had that much influence on anyone’s life, so I was happy to hear it. Some of those people touched my life too. I was glad for the opportunity to also tell them.”

He has the life most of us wish for at his age — to live independently at home where he plans to stay until he passes away. His advice to those of us wishing for longevity: “Keep breathing,” he said with a laugh.

On a more contemplative note, he said, “Don’t live in the past; you have to live for the future…even today I look forward to growing and make life better for others.”